Women are the most vulnerable section who are subjected to harassment of all forms. Statistics show that there is a steady rise of sexual abuse, domestic abuse, molestation and groping is on the rise. There is no dearth of attacks on women and they seldom retaliate which makes them an easy target. It is important that women know how to keep themselves safe. You can carry a pepper spray or a knife for self defense but you should also know how to use them

It is imperative that women learn the different techniques to protect their self esteem and life. Martial art forms for women can teach them how to tackle challenging encounters. A main advantage of learning martial arts is it makes you bold and courageous. Women who are submissive are mainly targeted; they seldom put up a fight. Martial arts imbibed you with a lot of inner strength, confidence and a bolder outlook which will be shown in the body language. This will dissuade attackers from pursuing. Several martial art forms for women are discussed in this article.

Karate is one of the popular martial art forms that women all over the world learn for self defence. It is a self defense technique that uses a lot of kicks and straight punches to defend the opponent. It helps manage the distance between you and your opponent and can maintain your position and stance with accuracy. It also helps reduce stress and weight. Judo is a martial art originated in Japan and dates back to the year 1882. It helps attack your opponent violently, throwing them to the ground. It applies so much force that it could break the ribs of the opponent. Techniques like chokes, arm lock and more that can incapacitate the opponent are taught. 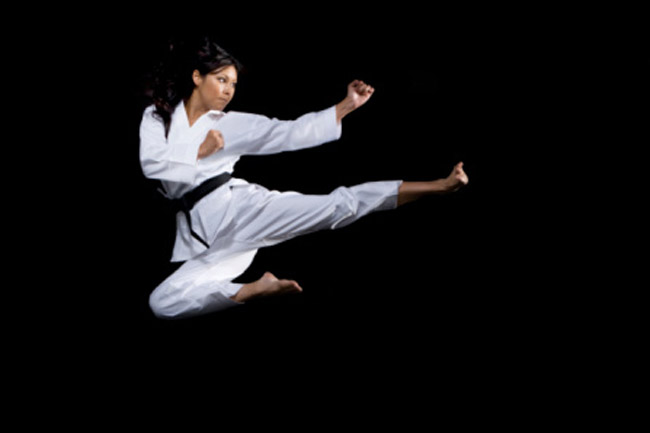 Taekwondo originated in Korea is a blend of karate and Chinese martial arts. It helps strengthen your core muscles and improves your flexibility. The main focus is agility and speed. It helps to form a sculpted body structure with biceps that can dishearten attackers. Krav Maga helps you come out of cornered situations by using anything around as a weapon. It could be a frying pan or a pen. It helps you make aware of the space around you and conditioning yourself quickly to gain confidence to tackle the opponent.

Muay Thai, known as the art of eight limbs, is a martial art form from Thailand. The eight limbs are your fists, elbows, feet and knees. It teaches you to be resilient and tough to inflict maximum damage. It is a refined version of the brutal Muay Boran in which you use the head and butts as well. Aikido is an ancient Japanese martial arts form that uses the opponent’s strength to fight him. It mostly concentrates on pressure joints, arm drag throws and joint locks. Tripping and throwing is also a part of this martial art. Wing Chun is a close range martial art that was invented by a woman. It was developed keeping in mind the kind of attack a woman’s face.

Kalaripayattu is known as the mother of martial arts is the oldest form that is almost 3000 years old. It teaches you to fight with animosity. Shields and swords are used as weapons to defend the opponent. This instils a lot of focus and self confidence in oneself. Kushti is a traditional Indian form of wrestling. It is an ancient sport that teaches you to control the opponent by using techniques like pinning, throws, takedowns and more. You gain immense stamina as you will have to toss around human beings. Silambam is a martial art that originated in South India. It uses a stick and a lot of acrobatic movements to fight off attackers. It helps improve your reflexes and agility. You can use anything around you to fend off an impending attack.

Gatka is a battlefield martial art form that was originally used by Sikhs. It teaches you to fight with a sword and shield. It helps increase your fighting skills by applying proper techniques to counter an attack. The refined form of this martial art uses sticks instead of swords. Musti Yuddha is a martial art form originated in Varanasi that is very similar to South Asian Kickboxing. It basically uses fists, feet, elbows and knees. It will definitely work as you defend with your elbow when someone wraps you from behind. A Lathi is the world’s oldest weapon which is mostly used by police officers to control rioting crowds. It can also be used as a shield to defend attacks. You can learn how to attack someone with least force and still cause a lot of damage. Thang Ta is a traditional martial art form from Manipur. It teaches you to use a spear and sword with ease in pace with your breathing to attack.