There are sports events for every sport in the world. It is vital that such events happen to identify the right talent. International sporting events like the world championships are one thing every country fights to win. The world karate championship happens every two years in designated countries. There is both male and female championship. It is the highest level of contest for karate organized by the World Karate Federation. It aims to promote karate as a sport and to make it more popular among people across the globe.

There are three parts of karate which are kihon, kata and kumite. Competitions are held for different sections of karate. Karate training happens at various levels. The belt system indicates the various levels. There are 6 different colours for belts in each level. It starts with white, orange, blue, yellow, green brown and black. A black belt is the highest honour and the student is declared an expert in martial arts and enables them to participate in competitive sporting events. Championships are a big boost for everyone including women. There are several stories of female karate championships that inspire every woman to take up martial arts.

Explore More About : How Did A Female Karate Master Work Her Way Up To The 2020 Olympics?

It takes a lot of determination and effort to get the coveted title of world championship. When the world karate championship took place in Spain in 2018, Sandra Sanchez had a historic win as she toppled the dream of reigning karate queen Kiyou Shimizu. It was historic for Spain as Sandra was the first female world champion who defeated the four time karate champion. She won over Shimizu in the kata category with three points. It was an inspiring moment for the entire nation especially for the women folks. 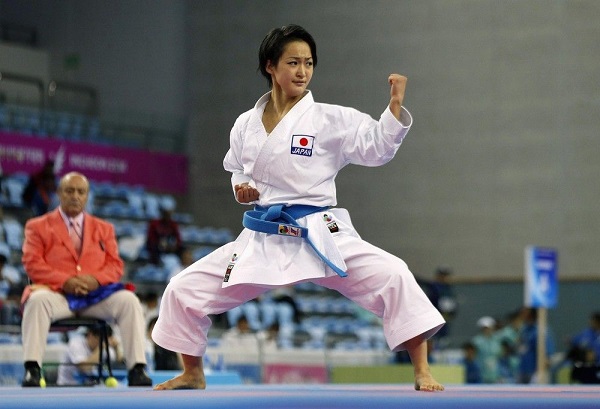 Sandra Sanchez and Kiyuo Shimizu have shown to the world that it is indeed possible for women to achieve their dreams. It is a tough path to tread on filled with hard work. Winning the coveted world championship was an emotional experience for Sandra Sanchez. She says that it was the support she got from the stands that drove her to victory. Sandra Sanchez did have world ranking before the championships. Interestingly, Sandra and Shimizu ate best friends while inspiring each other. It is a proud moment for anyone to see their country flag fly high in a world championship.

Reigning Over The Karate World Championship

Japan, China, France, Ukraine, and Italy have an upper hand when it comes to martial arts especially when it comes to karate. Karate was initially popularised in the main islands of Japan and was actively taught by the Okinawans. Eleni Chatziliadou is another inspiration in the history of karate. She won the world champion for Greece in the female kumite in the 68 kg category upsetting Ayumi Uekusa of Japan. Ayumi Uekusa was the front runner and the defending champion. It was a great display of skills with a convincing win of straight three points in the sets.