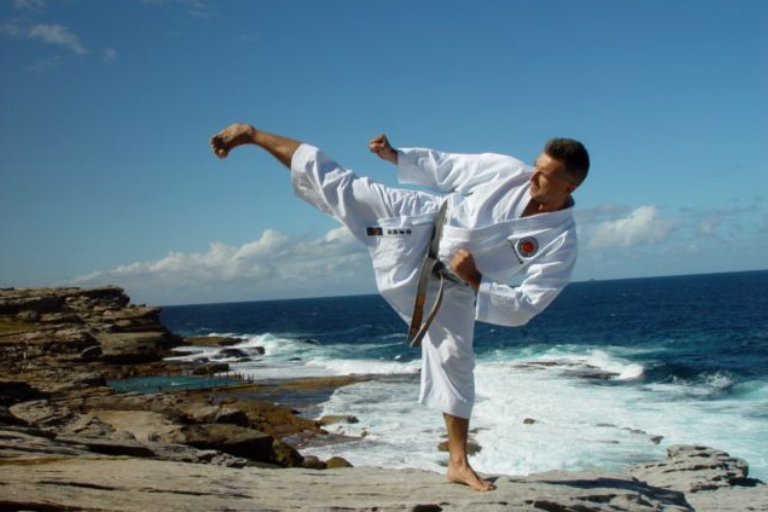 A Guide To The Best Karate Stances

Posted in Self Defense For Women

Karate And Its Postures

Karate is the best and most popular martial arts form pursued by men, women and children. As a self defense tool, it is a must to learn at least the basic karate stances in order to prevent or block an attacker. Each has some purpose and it is always best to learn them to perfection and practice it enough times so you can put them to use when an occasion arises. The basic stances which are the best karate stances are the foundation for the entire martial arts and it is crucial the students learn them. It can be effectively used as self defence or biomechanics. There are several styles in karate and the stances may vary. Some of the best karate stances that cover all the basic postures are detailed in this article.

Musubi-Dachi: In this Japanese martial arts, it is the formal way of standing or the standing stance. It is a respectful stance that has to be performed before and after any interaction between people, warm ups, kumite, kihon, kata. It is an important stance where you stand with the heels together, toes 45 degrees apart and hands close to your body.

Heisoku-Dachi: The closed leg stance or the ready stance which is used in kata. It is the same as musubi-dachi, but in this the feet are placed together.

Heiko-Dachi: The parallel stance or the get ready stance are used in some styles of karate which is generally performed after bowing. It is the stance performed when you are listening to your trainer. In this stance, you stand with feet parallel to your shoulders and arms apart about alongside the body.

Hachiji-Dachi: The natural stance or yoi-dachi is a formal waiting posture used in some styles of karate. It is the same as the Heiko-Dachi stance, the difference is that in this you stand with your crossed out in 45 degrees angle and the elbows are slightly bent.

Kiba-Dachi: The horse stance is the basic step used to practice any strike. It is a strong posture used for defending any attacks from the side. There will be minor variations in the distance between the feet and the bent in different schools and styles of karate. Japanese style of this stance is low and wide whereas Okinawan is narrower. In this stance, you stand with your feet two shoulders apart, toes facing forward and hands apart the body. Bring down your torso by bending your knee.

Shiko-Dachi: The square stance is the same as Kiba-Dachi. The difference is that the feet are open at a 45 degree angle.

Sanchin-Dachi: The three battle stance or the hourglass stance is a basic karate stance that gives great stability. This stance is used as a self defence, kata and kumite. Stand with your feet close together with one shoulder apart and feet turned inwards in 45 degree angle. Bend your knees and turn them inwards to protect your groin area. 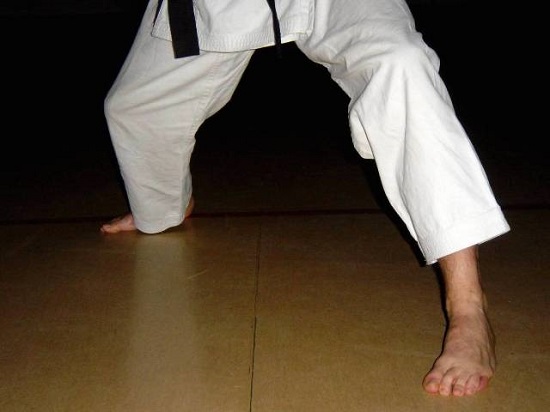 Tsuru-Ashi-Dachi: The crane stance is used to block attacks and can easily let you change into other techniques. In this stance you raise one leg and place the ankle between the knee of the standing leg. Bend your standing leg.

Kosa-Dachi: The cross stance is performed while dodging, turning or when landing after a jump. Move one leg forward with your foot flat on the floor. Place one knee behind the front knee with rear foot toes and balls pointed to the floor.

Seize: The kneeling stance is the traditional, polite and the formal way of sitting on the floor in karate and Japanese culture. Zarei or the floor bow is performed using this stance. You need to sit on your legs with knees bent on the floor and feet flat.

Zenkutsu-Dachi: The front stance or the forward stance is the most common stance that allows you to reach far and generate more power as you move forward. This stance is used for conditioning exercise and not used for any self defence.

Han Zenkutsu-Dachi: The half front stance is the shorter version of Zenkutsu stance. This stance is suitable for self defence.

Kokutsu-Dachi: The back stance is a defensive posture that allows you to retreat or move back.

Neko-Ashi-Dachi: The cat stance is a great defensive stance that helps you to apply sidekicks and counter attacks.

In all the above mentioned stances, you need to keep your neck and back straight and tilt the pelvis upward. You need to tense up the lower abdomen. For postures standing with both feet, you need to distribute the weight evenly.