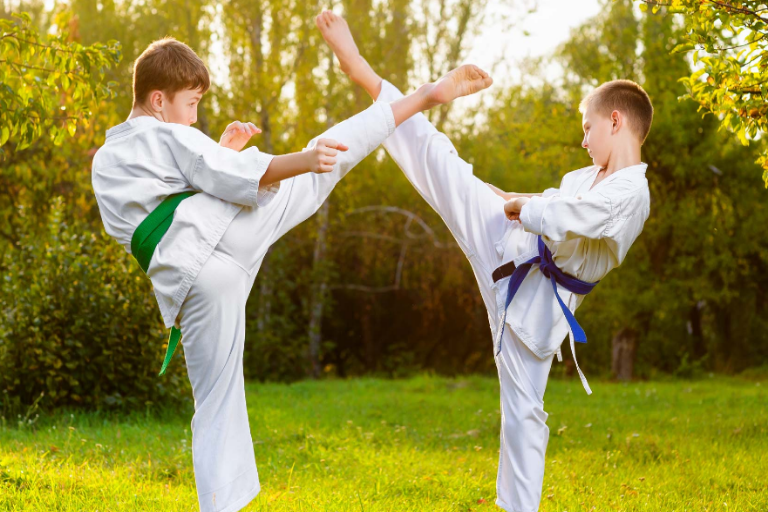 The Kick, The Punch and The Chop

How many times have we marvelled at the way the heroes on the silver screen knock out the greasy looking villain with a kick to his face? A kick is basically a strike with the leg to any part of the opponent’s body.

A kick that is well- calculated and timed can pack as much force as a vehicle trundling downhill at normal speed. It is an ingenious form of defence because it doesn’t require close proximity with the opponent. Delivered from a safe distance, a resounding kick can knock out a person or at least throw them off guard and off balance.

A coordinated , effective kick combines the effort of the whole body. The stance and posture play a vital role in keeping the body under control. Whilst one leg sturdily roots the body onto the ground, the kick is delivered using the other leg simultaneously unleashing the stored energy.

Tzuki or Zuki is the technical name given for punches in Karate.
When the knuckles are used, the blow is called a Seiken.

Usage of the fist terms the punch as an Uchi or a strike. Tzuki which translates to “thrust” in Japanese uses the entire body to generate the power. The stance of the body is relaxed yet controlled. The muscles of the upper and lower body are in complete coordination to form a wave that is unleashed by any part of the hand or palm.

The list of punches one comes across involves a whole gamut of blows. Use of skill to employ the knuckles, the palm, fist, ball of the palm and the elbow are the basics of a punch. Equally important is the use of hands to block the opponent’s kicks and punches. Block and tackle takes on an effective avatar when the footwork and stance are impeccable.

The basic punches include