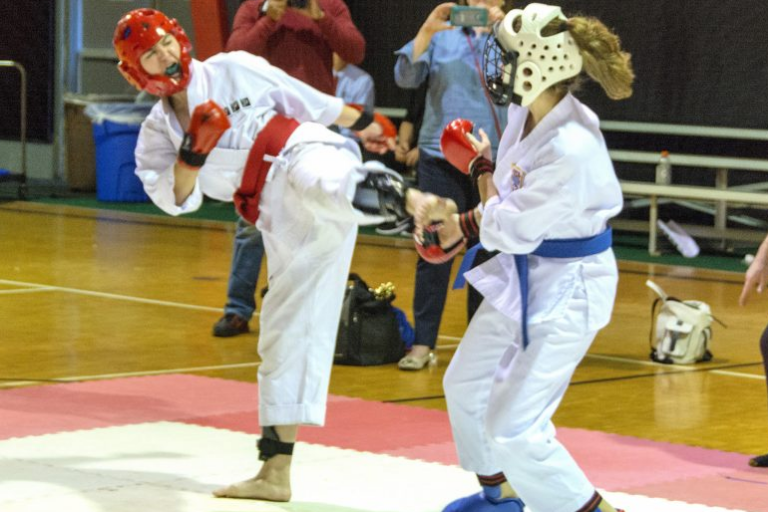 Easy To Follow Tips To Improve Your Point Sparring

Among the two, point sparring prevents injury and allows to strike with full speed but only light contact.

Good movement helps to avoid from being hit. It allows you to position your opponent so that you can hit easily.

Retreating Backwards is not effective in point sparring.

Slipping diagonally or sideways forces your opponent to change the direction of attacks.

Explore More About : The Kick, The Punch And The Chop

How To Create Scoring Opportunities

In Karate, Point Sparring uses a combination of feints, movement and kicks to create scoring opportunities.

Speed: Here, the opponent is closer to your front leg. To throw an attack, you have to lift your leg only. It is easier than back leg kicking where you have to square your hips first before throwing a kick.

Telegraphing: While you are using your front leg, you don’t give much time for your opponent to react. Because the only signal that tells about an attack is your foot leaving the ground. This can increase your chances of scoring a point.

Closing Distance: Pulling kick technique always allows you to kick with your front leg, and closes easily the distance between the opponent and you. The momentum of kicking leg will pull yourself forward. To master this technique, it requires consistent practice and it is really a significant way to offensively close the distance between you and your opponent.

Attack Surface: In traditional point sparring stance, you stand completely sideways to your opponent. This reduces the available area to hit you directly. In this stance, only your head and the belt area are exposed. You will be able to maintain a smaller attack surface while you kick using your front leg and still maintain being offensive. To avoid attacks from your opponent, you must learn to move diagonally. This is more effective for it creates attackable angles in the process.